Abstract: Dating of detrital white mica taken from the Carboniferous-Permian sediments of the Western Carpathians provided powerful results for determination of source areas. Two groups of samples were studied, first from the Carboniferous formations of the Northern Gemeric Unit and second from the Pennsylvanian-Permian sequence of the Hronic Unit. Both units are extremely important for the geodynamic reconstruction of the Western Carpathian Variscan Orogen, as the Northern Gemeric Late Paleozoic reflects the development of a Variscan collision suture and the sedimentary history of Hronicum formations allows reconstruction of the timing of rifting processes in the hinterland. Rift-related sediments of the Hronic Unit show a trend of increasingly older detrital mica in an upward direction. Three samples from the Nizna Boca Formation, belonging to Kasimovian–Gzhelian (Stephanian B-C), were investigated from the Hronic Unit. The stratigraphically lowest sample yielded an age of 309±3 Ma. The samples from the middle and upper portion of the Nizna Boca Formation delivered successively older ages of 318±2 Ma and 329±2 Ma respectively. The time gap between the average cooling in the source region and the age of sedimentation in the basal part of the Nizna Boca Formation does not exceed 5 Myr, whereas at the top of the same formation this time difference reaches about 20 Myr. The trend to older ages in higher stratigraphic levels in this tectonic unit is further corroborated by a sample derived from the Permian Maluzina Formation, 2nd megacycle, which yielded a still older age of 342±3 Ma. These cooling ages of the source area reflect development of the Hronicum terrestrial rift and heterogeneity of the source area, with gradual rifting and cooling of the lithosphere. Four samples from the Northern Gemeric Unit were also investigated. A multi-grain sample from the Mississippian Hradok Formation yielded a 465±2.5 Ma cooling age of the source area. This proves the existence of Ordovician crustal fragments in the Variscan collision suture. Newly-formed fine-grained muscovite gave a distinct staircase pattern from 87 Ma at the rim to 142 Ma in the core. It reflects composite Alpine overprint of these metasediments. Multi-grain analyses of detrital mica from the Moscovian (Westphalian) Rudnany Formation sandstone and from an orthogneiss pebble from the associated conglomerate yielded ages of 385±3 Ma and 372±2.5 Ma, which reflect a uniform Variscan source. 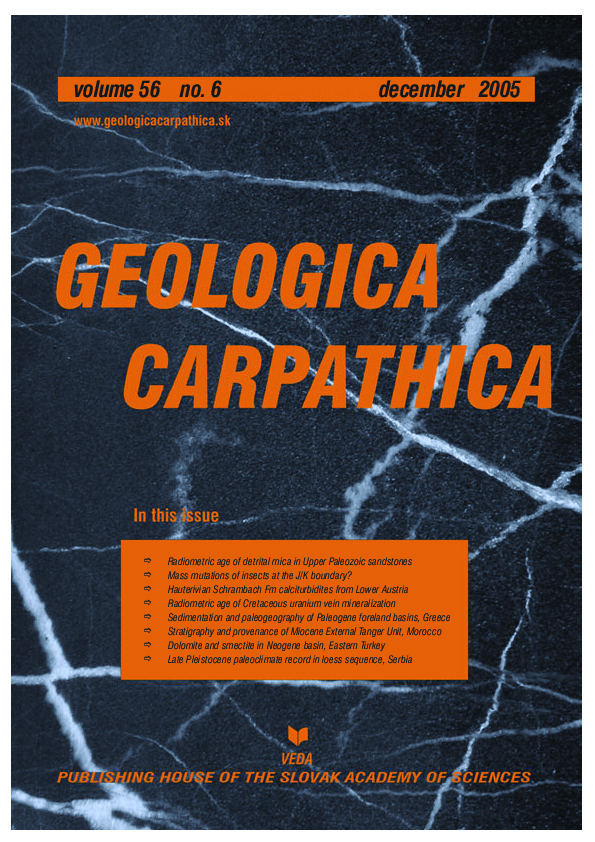