Abstract: The Pindos Ophiolite rocks include variably serpentinized peridotites derived from a harzburgitic and subor- dinately dunitic mantle. In the serpentinized matrix of these rocks pseudomorphic (mesh, bastite) and non-pseudomor- phic (interpenetrating, type-2 hourglass) textures were recognized. Chromian spinel (Cr-spinel) is anhedral to subhedral and often replaced by a porous opaque phase. Chemistry data show that Cr-spinel cores retain their original composi- tion, having Cr#[Cr/(Cr + Al)] that ranges between 0.45 and 0.73, and Mg#[Mg/(Mg + Fe2+)] that varies between 0.52 and 0.65, accompanied by low content in TiO2 (< 0.11 wt. %). The relatively wide variation of their Cr# values reflects that the studied peridotites were produced by variable degrees of melting. It is likely that the Pindos peridotites repre- sent mantle residues originally formed in a mid-ocean ridge (MOR) environment, which were subsequently entrapped as part of a mantle wedge above a supra-subduction zone (SSZ) regime. Cr-spinel adjacent to clinochlore systematically displays limited compositional and textural zoning along grain boundaries and fractures. However, the degree of peri- dotite serpentinization does not correlate with the abundance of zoning effects in accessory Cr-spinel. Thus, Cr-spinel zoning is thought to represent a secondary feature obtained during the metamorphic evolution of the host peridotites. Core to rim compositional trends are expressed by MgO and Al2O3 impoverishment, mainly compensated by Cr2O3 and FeO increases. Such chemical trends are produced as a result of Cr-spinel re-equilibration with the surrounding serpen- tine, and their subsequent replacement by ferrian (Fe3+-rich) chromite and clinochlore, respectively, during a brief, fluid assisted, greenschist facies metamorphism episode (T > 300 °C). The limited occurrence of ferrian chromite with high Fe3+# values suggests that elevated oxidizing conditions were prevalent only on a local scale during Cr-spinel alteration. 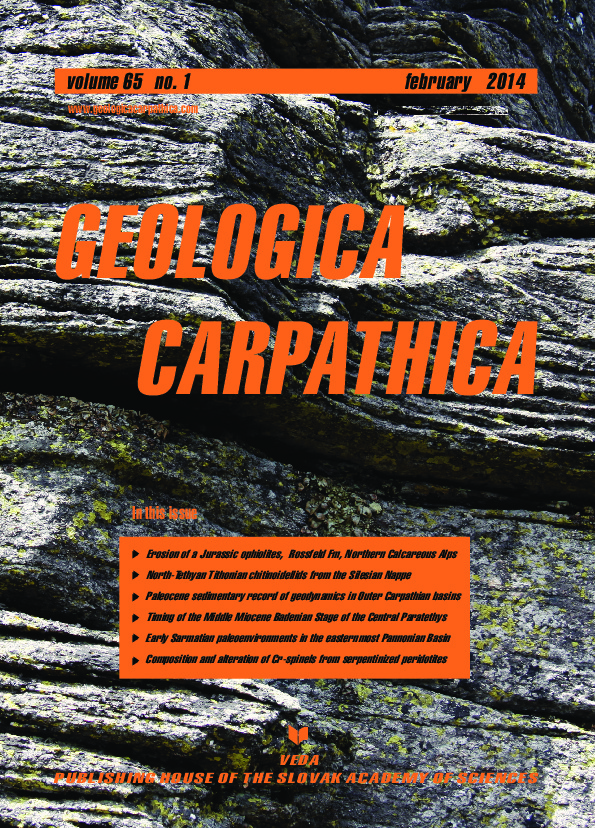