Provenance of the detrital garnets and spinels from the Albian sediments of the Czorsztyn Unit (Pieniny Klippen Belt, Western Carpathians, Slovakia)

Abstract: According to earlier concepts, the Czorsztyn Unit (Oravic Superunit, Pieniny Klippen Belt, Western Carpathians) sedimented on the isolated Czorsztyn Swell which existed in the Middle Jurassic–Late Cretaceous time in the realm of the Outer Western Carpathians. This paper brings new data providing an alternative interpretation of its Cretaceous evolution. They are based on heavy mineral analysis of the Upper Aptian/Lower Albian sediments of the Czorsztyn Unit. They rest upon a karstified surface after a Hauterivian-Aptian emersion and are represented by condensed, red marly organodetritic limestones with some terrigenous admixture (Chmielowa Formation). The heavy mineral spectrum is dominated by spinels, followed by garnet, with lesser amounts of zircon, rutile and tourmaline. The composition of the majority of the detrital garnets shows that they were derived from primary HP/UHP parental rocks which were recrystallized under granulite and amphibolite facies conditions. The garnets were most probably derived directly from the magmatic and metamorphic rocks of the Oravic basement, as the high-pyrope garnets are known to be abundant in Mesozoic sediments all over the Outer Western Carpathians. The presence of spinels is surprising. According to their chemistry, they were mostly derived from mid-oceanic ridge basalts (MORB) peridotites, supra-subduction zone peridotites (harzburgites) and transitional lherzolite/harzburgite types. Only a lesser amount of spinels was derived from volcanics of BABB composition (back-arc basin basalts). The presence of this ophiolitic detritus in the Czorsztyn Unit is difficult to explain. Ophiolitic detritus appeared in the Aptian/Albian time only in the units which were considered to be more distant, because they were situated at the boundary between the Central and the Outer Western Carpathians (Klape Unit, Tatric and Fatric domains). The hypothetical Exotic Ridge which represented an accretionary wedge in front of the overriding Western Carpathian internides was considered to be a source of the clastics. In previous paleogeographical reconstructions, the Czorsztyn Unit was situated north of the Pieniny Trough (considered to be one of the branches of the Penninic-Vahic Ocean). In the trough itself, the ophiolitic detritus appeared as late as in the Senonian and there was no way it could reach the Czorsztyn Swell which was considered to be an isolated elevation. The new results presented herein show that these reconstructions do not fit the obtained data and infer a possibility that the Czorsztyn sedimentary area was not isolated in the Cretaceous time and it was situated closer to the Central Carpathian units than previously thought. A new paleogeographical model of the evolution of the Pieniny Klippen Belt is presented in the paper: Oravic segment was derived from the Moldanubian Zone of the Bohemian Massif by the Middle Jurassic rifting which caused block tilting where most of the Oravic units were arranged north of the Czorsztyn Swell. The Oravic segment was situated in the lateral continuation of the Central and Inner Western Carpathians from which it was detached by later clockwise rotation. The Oravic segment was then laterally shifted in front of the Central Western Carpathians, together with remnants of the Meliatic suture zone which represented a source for the exotics to the Klape, Tatric, Fatric and Oravic units. 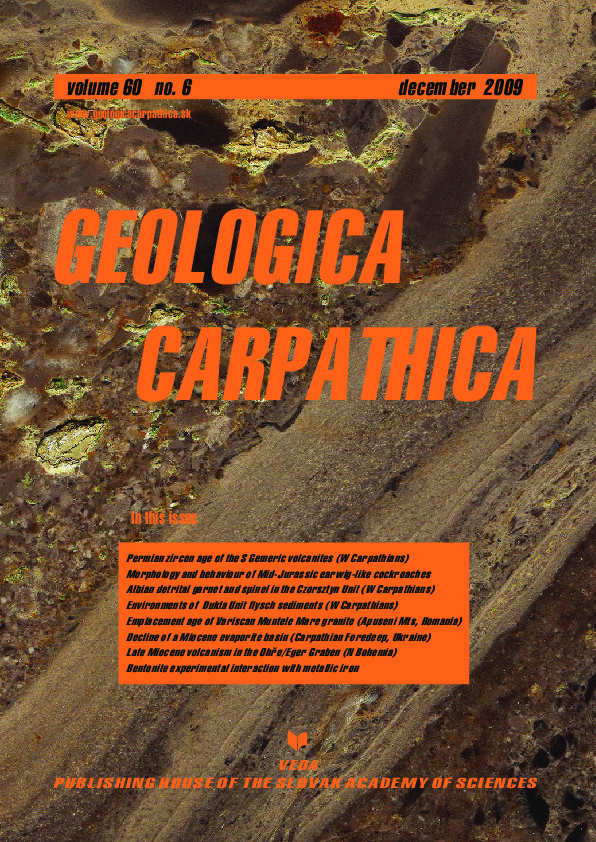