Hydrothermal mineralisation of the Tatric Superunit (Western Carpathians, Slovakia): II. Geochronology and timing of mineralisations in the Nízke Tatry Mts.

Abstract: Ore mineralisations from the Nízke Tatry Mts., assigned to a number of mineralisation stages, were dated in this work by U/Pb analysis by laser ablation–sector field–inductively coupled plasma–mass spectrometry (LA–SF–ICP–MS), Re/Os, chemical Th/U/total Pb isochron method (CHIME), and U–total Pb methods. The samples originated mostly from the large Dúbrava deposit, with additional samples from Magurka, Rišianka, Soviansko, and Malé Železné deposits and occurrences. Additional, mostly unpublished Re/Os, K/Ar, and Ar/Ar data are also considered and discussed. Uraninite from a granite pegmatite and molybdenite from quartz veinlets gave ages of 343±1 and ≈351 Ma, respectively, comparable to the ages of the host rocks. The previously published K/Ar datum on biotite from the scheelite stage (330±5 Ma) is interpreted as a cooling age and its relation to the ore mineralisation is not clear. The arsenopyrite–pyrite–gold stage was dated, although only at a single sample, to 320±8 Ma. The ages for the samples of the stibnite–sphalerite–Pb–Sb-sulfosalts stage scatter also around this date, showing that these mineralisations are late Variscan. It could be assumed that this stage formed during the life span of a fluid circulation system and the later precipitation of stibnite and sulfosalts is simply owing to the temperature dependence of Sb solubility in the fluids. Scattered K/Ar data on illite document the Jurassic continental rifting but seem to be linked to none of the hydrothermal stages. The dolomite–baryte–tetrahedrite stage formed during the post-rift thermal relaxation of the Tatric basement, with ages varying between 156±13 and 128±4 Ma. The quartz–tourmaline stage, devoid of ore minerals, formed during the mid-Cretaceous Alpine metamorphism, with the scattered data averaging to ≈100 Ma. The following compression of the Tatric and Veporic complexes is reflected in sparse U/Pb carbonate ages (72 Ma) and remobilisation of uranium mineralisation (70 Ma). The constraints on the age of the quartz–Cu-sulfide and galena–sphalerite stages are insufficient but their formation could be perhaps placed into uppermost Cretaceous. The vein carbonates were remobilised at 17–31 Ma, with most ages clustering around 24 Ma, related to the burial of parts of the Tatric basement under the Central Carpathian Paleogene Basin. This work documents many episodes of Variscan and Alpine hydrothermal activity that can be linked to the tectonothermal evolution of the Western Carpathians. 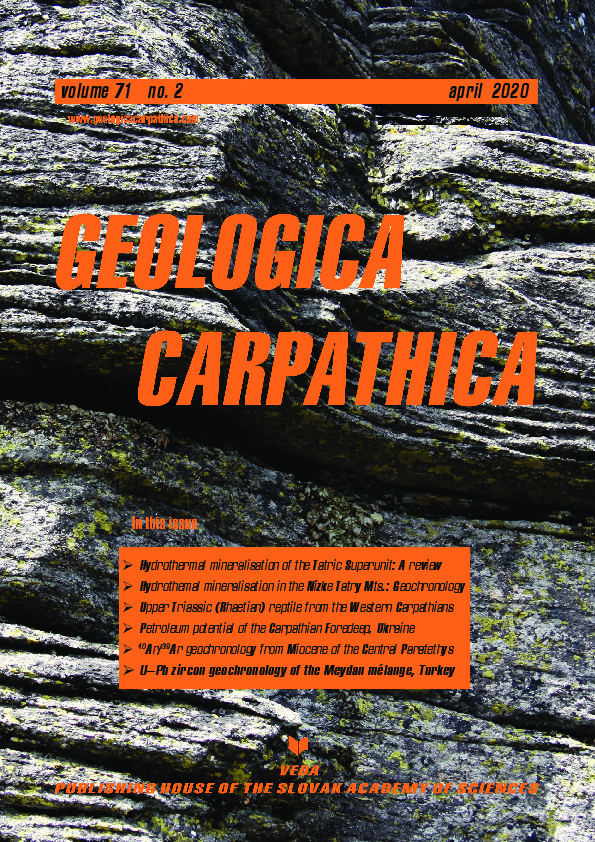