An integrated paleomagnetic and magnetic anisotropy study of the Oligocene flysch from the Dukla nappe, Outer Western Carpathians, Poland

Abstract: The Dukla Nappe belongs to the Outer Western Carpathians, which suffered considerable shortening due to the convergence and collision of the European and African plates. In this paper we present new paleomagnetic and magnetic anisotropy results from the Polish part of the Dukla Nappe, based on 102 individually oriented cores from nine geographically distributed localities. Susceptibility measurements and mineralogy investigations showed that paramagnetic minerals are important contributors to susceptibility anisotropy (AMS). The AMS fabrics are related to deposition/compression (foliation) and weak tectonic deformation (lineation). The AARM fabric, that of the ferrimagnetic minerals, seems to be a less sensitive indicator of tectonic deformation than the AMS fabric. The inclination-only test points to the pre-folding age of the remanent magnetizations. Seven localities exhibit CCW rotation, a single one shows CW rotation. The CCW rotated paleomagnetic directions form two groups, one showing large, the other moderate CCW rotation. Previously published paleomagentic directions from the Slovak part of the same nappe exhibit smeared distribution between them. The declination of the overall-mean paleomagnetic direction for the Dukla nappe is similar to those observed in the neighbouring Magura and Silesian nappes, but it is of poorer quality. The AMS lineations at several localities are deviating more to the west from the present north than that of the local tectonic strikes. A possible explanation for this is that the AMS lineations were imprinted first, probably still in the Oligocene, while the sediments were soft (ductile deformation) and the folding and tilting took place during the CCW rotation. 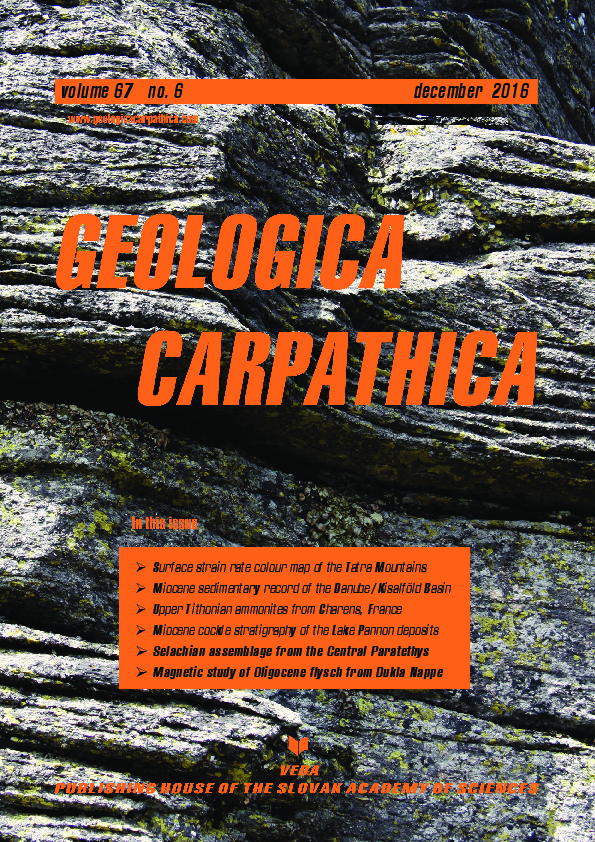