Abstract: The tectonic evolution of the pre-Cenozoic basement, as well as the Cenozoic structures within the Danube Basin (DB) and its northern periphery are presented. The lowermost portion of the pre-Cenozoic basement is formed by the Tatricum Unit which was tectonically affected by the subduction of the Vahicum / Penninicum distal continental crust during the Turonian. Tectonically disintegrated Tatricum overlaid the post-Turonian to Lower Eocene sediments that are considered a part of the Vahicum wedge-top basin. These sediments are overthrust with the Fatricum and Hronicum cover nappes. The Danube Basin Transversal Fault (DBTF) oriented along a NW– SE course divided the pre-Neogene basement of the DB into two parts. The southwestern part of the DB pre-Neogene basement is eroded to the crystalline complexes while the Palaeogene and Mesozoic sediments are overlaid by the Neogene deposits on the northeastern side of the DBTF. The DBTF was activated as a dextral fault during the Late Oligocene – Earliest ­Miocene. During the Early Miocene (Karpatian – Early Badenian) it was active as a normal fault. In the Middle – Late Miocene the dominant tectonic regime with NW – SE oriented extension led to the disintegration of the elevated pre-Neogene basement under the simple and pure shear mechanisms into several NE – SW oriented horst and graben structures with successive subsidence generally from west to east. The extensional tectonics with the perpendicular NE – SW ­orientation of the Shmin persists in the Danube Basin from the ?Middle Pleistocene to the present. 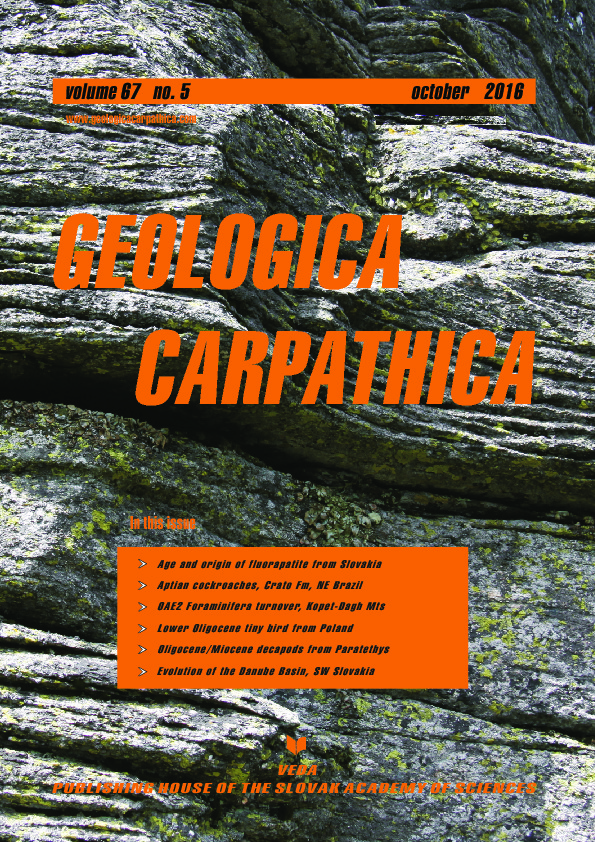