Abstract: Hydrothermal mineralization hosted by the Lower Cretaceous igneous rock of the teschenite association at Jasenice (Silesian Unit, Flysch Belt, Outer Western Carpathians) occurs in two morphological types – irregular vein filled by granular calcite and regular composite vein formed by both fibrous and granular calcite and minor chlorite, quartz, and pyrite. Crosscutting evidence indicates that the granular veins are younger than the composite vein. The composite vein was formed by two mechanisms at different times. The arrangement of solid inclusions in the marginal fibrous zone suggests an episodic growth by the crack-seal mechanism during syntectonic deformation which was at least partially driven by tectonic suction pump during some stages of the Alpine Orogeny. Both the central part of the composite vein and monomineral veins developed in a brittle regime. In these cases, the textures of vein suggest the flow of fluids along an open fracture. The parent fluids of both types of vein are characterized by low temperatures (Th = 66—163 °C), low salinities (0.4 to 3.4 wt. % NaCl eq.), low content of strong REE-complexing ligands, and δ18O and δ13C ranges of + 0.2/+12.5 ‰ SMOW and —11.8/—14.1 ‰ PDB, respectively. The parent fluids are interpreted as the results of mixing of residual seawater and diagenetic waters produced by dewatering of clay minerals in the associ- ated flysch sediments. The flow of fluids was controlled by tectonic deformation of the host rock. 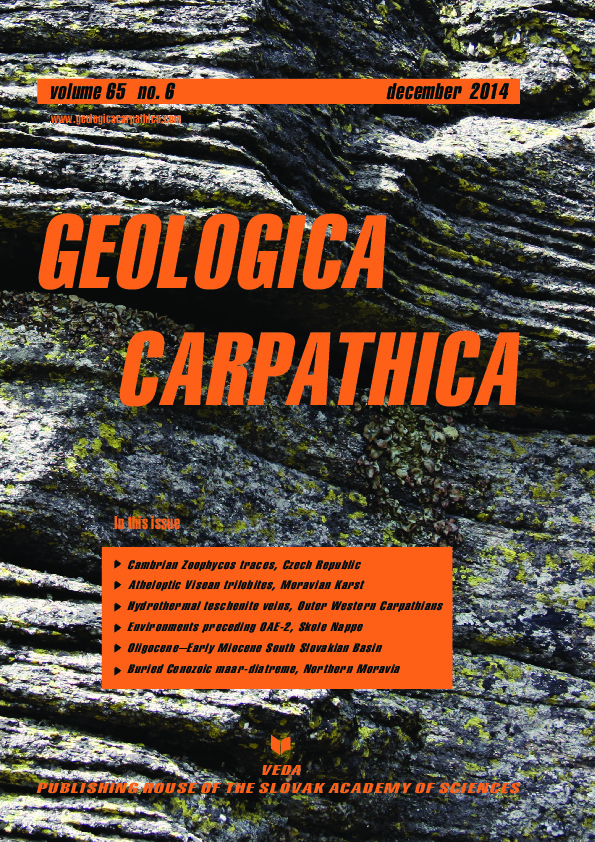