Abstract: The Štiavnica Stratovolcano in Central Slovakia is the largest volcano in the Neogene to Quaternary Carpathian volcanic arc. A large caldera, an extensive subvolcanic intrusive complex and a resurgent horst with late stage rhyolite volcanites are the most characteristic features. The results of new K-Ar and Rb-Sr isotope dating using more sophisti- cated methodical approaches have changed our view on the timing of volcanic and intrusive activity. K-Ar dating of groundmass fractions combined with Rb-Sr isochron dating in the cases of possible rejuvenation has provided highly reliable results. The lifespan of the stratovolcano is apparently shorter than assumed earlier. Evolution of the stratovol- cano took place in five stages during the Early Badenian to beginning of Early Pannonian time: (1) construction of the extensive andesite stratovolcano during the interval 15.0—13.5 Ma; (2) denudation of the volcano concluded with the initial subsidence of a caldera and the contemporaneous emplacement of a subvolcanic intrusive complex of diorite, granodiorite, granodiorite porphyries and quartz-diorite porphyries during the interval 13.5—12.9 Ma; (3) subsidence of the caldera and its filling by differentiated andesites during the interval 13.1—12.7 Ma – volcanic activity overlapping with the emplacement of the youngest intrusions; (4) renewed explosive and effusive activity of less differentiated andesites during the interval 12.7—12.2 Ma; (5) uplift of the resurgent horst in the central part of the caldera accompa- nied by rhyolite volcanic/intrusive activity during the interval 12.2—11.4 Ma. Extensive epithermal mineralization was contemporaneous with the uplift of the resurgent horst and rhyolite volcanic activity and continued till 10.7 Ma. 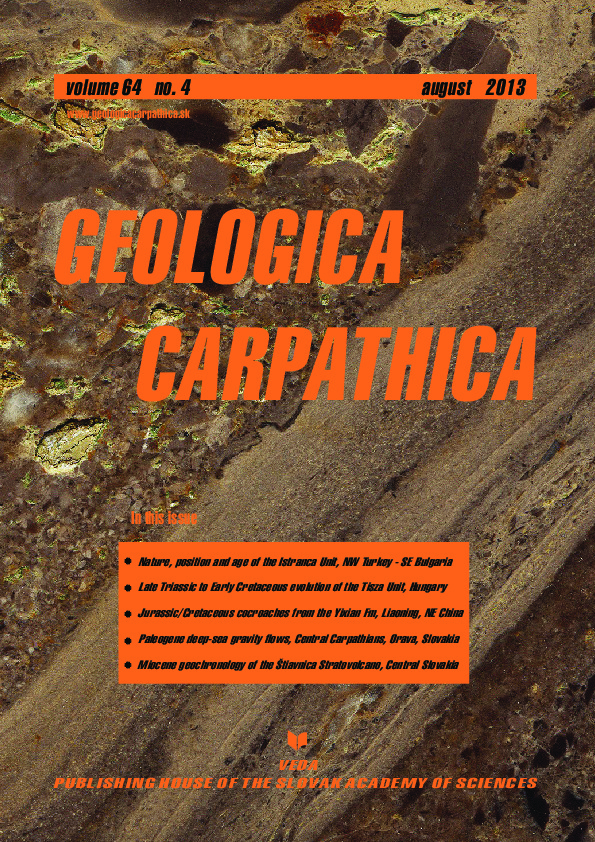