Magneto-, and isotope stratigraphy around the Jurassic/Cretaceous boundary in the Vysoka Unit (Male Karpaty Mountains, Slovakia): correlations and tectonic implications

Abstract: Magneto- and isotope stratigraphic studies in the Vysoka Nappe (Hlboca section, Fatric Unit, Male Karpaty Mts, Slovakia) were performed. A generally decreasing δ13C isotope curve is interpreted as a primary trend from the Late Oxfordian (3.3 ‰ V-PDB) to the Late Tithonian (1.8–1.4 ‰ V-PDB). Data from the Tithonian part of the Tegernsee Formation probably reflect “local” basin processes connected with the breccia formation in the latest Tithonian/earliest Berriasian and/or with possible diagenetic overprint. The C-isotope record of the Berriasian Padla Voda Formation is more homogeneous (1.4–1.8 ‰ V-PDB) and assumed to be primary. Magnetostratigraphic investigations were focused on the Jurassic/Cretaceous (J/K) boundary strata. Upper Tithonian nodular limestones of the Tegernsee Formation differ substantially from Lower Berriasian calpionellid limestones of the Padla Voda Formation in rock magnetic properties. Hematite is present in the Tegernsee Formation, while magnetite is the only magnetic mineral of the Padla Voda Formation. Additionally, the latter formation contains superparamagnetic magnetite, which significantly influences its magnetic susceptibility. Correlation of normal and reversed magnetic intervals with the Late Tithonian global polarity time scale was supported by microfossil stratigraphy. M21n to M20n magnetozones were distinguished, including the short reversed Kysuca (M20n1r) Subzone within M20n. Interpretation of Lower Berriasian magnetostratigraphy was more complex due to presence of breccia horizons and a stratigraphic gap at the J/K boundary in the lower part of the Padla Voda Formation embracing M19r and most of M19n magnetozones. This formation was also partially affected by remagnetization. Detailed correlation between the isotope- and magnetic stratigraphy of the Tithonian–Berriasian interval between Hlboca and Brodno sections is also complex due to J/K stratigraphical gap within the Hlboca section. The primary B component accounts for counter-clockwise rotation of the Vysoka Unit with a magnitude of ca. 50°. Since the paleodeclination of Paleogene and Karpatian–Eggenburgian rocks in the area is similar, the rotation must have taken place after Early Miocene. The paleoinclinations of several Upper Tithonian–Berriasian sections of the Central Western Carpathians and western part of the Pieniny Klippen Belt are consistent and indicate paleolatitude of 27–30°N. 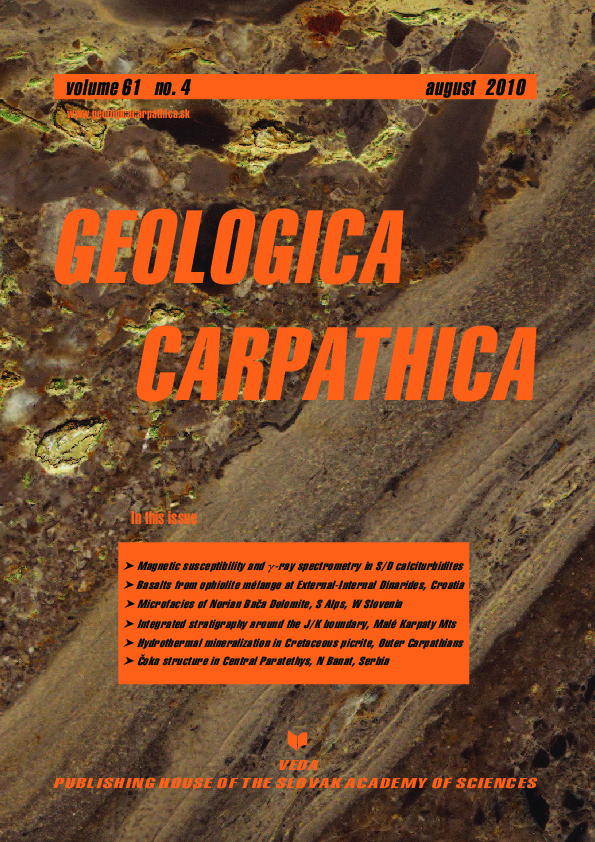