Paleogene depositional systems and paleogeography of the submarine fans in the western part of the Magura Basin (Javorniky Mountains, Slovakia)

Abstract: This paper gives an overview of the depositional systems and paleogeography of the submarine fans in the western part of the Magura Basin. Four fundamental petrographic groups were distinguished within the sandstones of this area: Solan, Riecky, glauconitic and Magura group. This classification responds to four source areas supplying sedimentary material into the western part of the Magura Basin. The sedimentation developed in a few separated depositional cycles. First the massive to the basin prograding wedge of the Solan Formation was deposited along the northern margin of the Magura Basin during the Late Cretaceous to Early Paleocene. Later the central zone of the basin subsided probably more significantly. The coarse-clastic sedimentation shifted in the Raca Zone from the margin into the deeper part of the basin as a result of this subsidence since the Early Paleocene. The depositional fans of the Riecky sandstone type were formed there. Uplift of the Silesian Ridge advanced from the W to the E during the Middle Eocene. Its result was the shifting of the source of the sedimentary material. This new source supplied to the basin glauconite sandstones from the NE. This sedimentation represented an asymmetrical fan of the proximal coarse-grained Pasierbiec sandstone type and pelitic distal facies. Sedimentation of the Riecky sandstone type was renewed with a reduced volume once more during the Middle Eocene. The period of the subsided and uplifted basin floor blocks followed rather flattened subsidence of the basin floor since the late Middle Eocene (Lutetian). Two extensive depositional fans developed parallel to the basin elongation direction in that time. These were the glauconitic and Magura fans. Both fans existed side by side simultaneously and interfingered each other. These fans prograded from the South into the Raca sedimentation area. The depositional systems and paleogeography of the submarine fans in the western part of the Magura Basin were controlled mainly by basin floor subsidence, by the local sediment supply, synsedimentary tectonics, by the progress of the subduction of the southern Magura Basin margin and also by the depositional pressure of the adjacent fan. 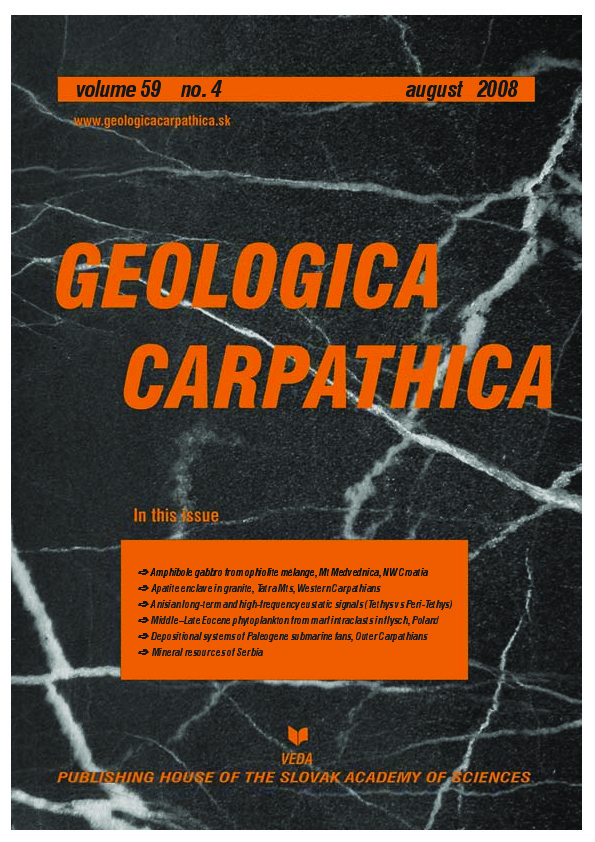