THE ROLE OF BORON AND FLUORINE IN EVOLVED GRANITIC ROCK SYSTEMS (ON THE EXAMPLE OF THE HNILEC AREA, WESTERN CARPATHIANS)

Abstract: The Hnilec S-type granites show a primary enrichment in the elements Sn, Rb, B, F, Nb, Ta and W which are hosted in mineral assemblage of cassiterite, tourmaline, fluorite, Ta- and Nb-phase etc. Such an evolved or specialized character of primary felsic melt was caused by a higher mobility of volatiles (B, F) due to the primary increased contents, which resulted in depolymerization of melt and consequently the decrease of density and viscosity. The B content in the granite body increases toward the granite roof-zone and reaches its maximum in the marginal granitic pegmatites and in the surrounding wall rocks. The greisenized granite parts are generally low in B. Although the F content also increases towards granitic cupolas and the highest F is in the altered parts (greisens), it is very low in the exocontact wall rocks compared to boron. Principally, there are not significant differences in boron and fluorine mobility but the observed assemblage are simply related to precipitation mechanisms, which are very different for the two elements. The main B carrier is tourmaline, which was formed by primary magmatic and secondary hydrothermal precipitation. The tourmaline found in the granites is mainly schorl, rarely foitite, whereas, tourmaline with higher dravite molecule is typical of the granitic exocontact. The schorl with higher dravite molecule also occurs in the cracks and rims of the primary schorl and formed from post-magmatic volatiles, which circulated between granites and granite host rocks possibly during mixing of magmatic and meteoric waters. The main concentrators of F are white mica, which trapped fluorine by OH exchanges, and fluorite. The outline of the greisen formation in the Hnilec region has been interpreted as a process above the emanation centre in the Hnilec granite cupola at locality Medvedi potok Valley. An emanation spot was a space with high volatile flux localized above the position of hydromagma which formed beneath a fine-grained granite carapace or between fine- and coarse-grained granites in the overpressurring regime. If the vapour pressure of the dissolved fluid exceeded the lithostatic pressure it caused the rupture of the overlying crystalline rocks and the flux of volatiles have altered rocks and became the source of special mineralization of the Hnilec and Gemer granites. 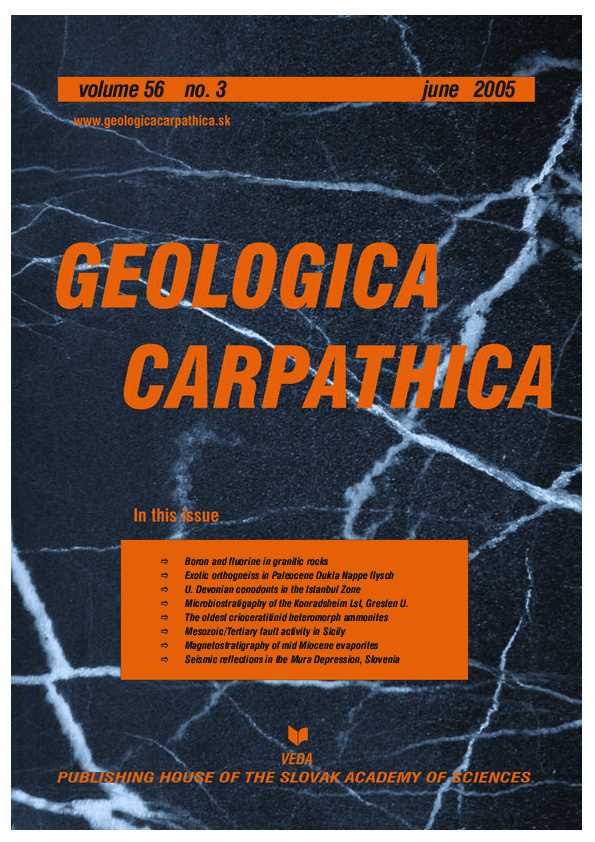