Abstract: The Pieniny andesite line is a 20 km long zone, which cuts obliquely the contact between the Pieniny Klippen Belt which separates the Inner and Outer Western Carpathians and the Magura Nappe (the innermost nappe system of the Outer Western Carpathians). The andesites (dykes and sills) were formed during two intrusion phases. The older dykes are subparallel to the andesite line, while the younger ones are perpendicular to it. Formerly, the andesites were thought to be of Sarmatian age, recently obtained K/Ar ages are in the 10.8–13.5 Ma range. For paleomagnetic study, we drilled macroscopically fresh material from both generations of the andesites. The samples were subjected to detailed alternating field and thermal demagnetization. Isothermal remanence acquisition experiments, Curie-point measurements and microscopy analysis of polished sections were carried out in order to identify magnetic minerals. The results are as follows. The second phase andesites and some sites in the first phase andesites have complex natural remanent magnetizations (NRM) with two stable components: one is isolated below, and the other above the Curie-point of magnetite. It is remarkable that thermal demagnetization was often needed to reveal all components of the NRM although the rocks we studied were Neogene igneous rocks which are considered ideal targets for the less time-consuming alternating field method. The lower temperature component follows a great circle containing the expected stable European direction of corresponding age. The higher temperature component has counterclockwise rotated declination. The remaining sites of the first phase andesites have practically a single component remanence, which corresponds to one or the other of the directions described above. The components with counterclockwise rotated declinations cluster around an overall-mean direction of D=133°, I=–56° with k=26, α95=12° (based on 7 site-mean paleomagnetic directions). Neither the magnetic minerals, nor their degree and type of alteration are different in the two generations of andesites. Thus, the agents of remagnetization were probably hot fluids acting after the emplacement of the second generation dykes. The tectonic implication of our results is that the Pieniny andesite area must have rotated counterclockwise, after emplacement of the second phase dykes. 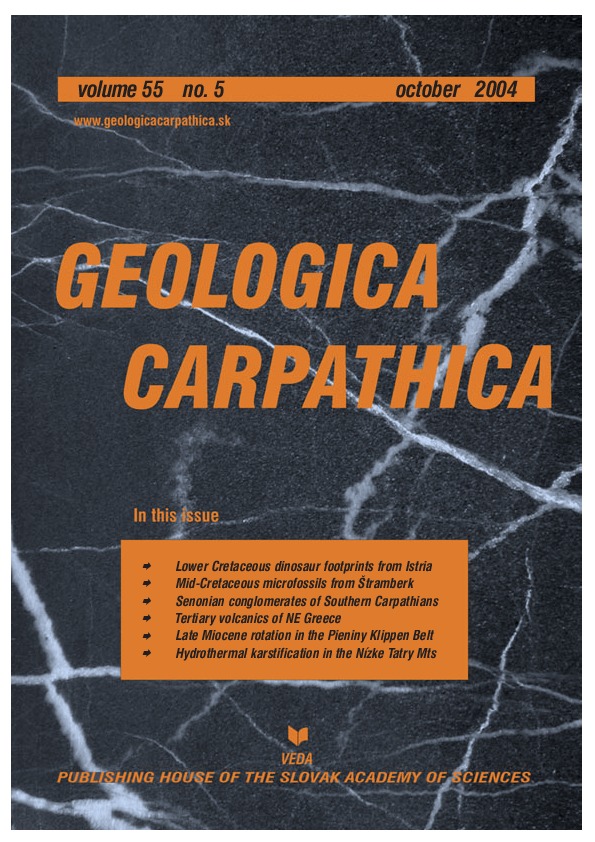